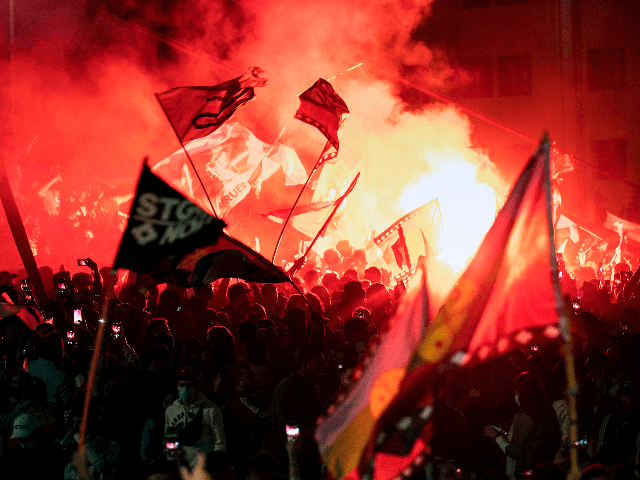 Violence, looting, and disorder erupted in Chile on Sunday evening after an overwhelming majority of people voted in favor of destroying the country’s constitution, replacing it with a new document more favorable to the nation’s left wing.

Approximately 78 percent of Chileans voted in favor of a new constitution in Sunday’s vote, called by the country’s center-right President Sebastián Piñera last November as an appeasement to left-wing riots allegedly triggered by rising subway prices in Santiago (the constitution plays no role in public transportation pricing).
Election officials estimated turnout at around 7.5 million, the highest figure since 1989.
On the night of the elections, local media reported that police arrested at least 19 people for looting a pharmacy and a supermarket. In the commune of Melipilla outside Santiago, rioters attacked a police station, injuring eight officers, while also installing barricades on a carriageway to prevent the movement of traffic.
A report from the T13 television station also detailed cases of attacks on polling stations, including one report of an individual allegedly attempting to bomb an electoral commission office hours before the vote took place. To prevent potential outbreaks of violence, the government deployed around 23,000 police officers nationwide to protect polling stations.

The vote to do away with the constitution, installed in 1980, follows a turbulent year marred by widespread arson of public buildings, including metro stations and churches, as well as looting and violence. Last week, rioters burned down a church before spraying it with satanic graffiti such as the number 666, a reference to the devil. Last year, following the eruption of violence in October 2019, Chilean police revealed they had identified dozens of foreigners participating in violence from communist and socialist regimes such as Venezuela and Cuba.

Piñera, a centrist billionaire, celebrated the end of the nation’s constitution, describing the current constitution as “divisive” and urging Chileans to “work together so that the new constitution is the great framework of unity, stability and the future.”
“Today citizens and democracy have triumphed, today unity has prevailed over division and peace over violence,” he said in a televised address after the vote was confirmed. “And this is a triumph for all Chileans who love democracy, unity, and peace, without a doubt.”

As well as being asked whether they wanted a new constitution, voters could also choose who wrote the new document: a body of 155 people elected by popular vote or members of the country’s congress. Voters chose the latter.
Once the new constitution is ready, the public must approve it via an exit referendum set to take place in 2020.
Although the vote provides Chileans with the opportunity to update their constitution for the modern democratic era, the result ultimately represents another big victory for the left, whose side has agitated for a constitution that would include a variety of engrained economic rights including housing and healthcare.
Under the 1980 constitution, Chile became the wealthiest and most prosperous nation in Latin America.
Fuente: Breitbart